Michael Young is the Catering and Events Coordinator for Halyards Catering

Michael Young began his career with Halyards Catering in 2014, gaining unparalleled experience in the food, beverage, and hospitality industries as a warehouse and logistics manager. In 2016, Michael was promoted to his current position as catering and events manager, working directly with clients to design, plan, and execute exceptional experiences.

At 16, his dedication to supercross and motocross took him to the highest level of the sport. Michael had a successful racing career, competing around the world for more than ten years. In addition, he participated in the production of educational and training videos for youth riders, performed stunt work, and was featured in several magazines. After injuries resulted in an early retirement from racing personally, Michael stayed involved in the sport as a team manager for a pro team, leading staff and racers to a record-breaking season while sharpening his planning and execution capabilities.

As a professional athlete, Michael learned the value of hard work and perseverance in achieving his goals. Strategizing his own racing career and leading a pro racing team gave him tools he utilizes today in the event planning and hospitality industry.

Michael is married to Heather and is the proud father of three amazing girls—Scarlett, Missy, and Makenzie. When not working with Halyards clients, Michael enjoys spending time with his family, golfing with his father, flying his drone, and repairing iPads and iPhones.

Following graduation from the New England Culinary Institute in Vermont, he moved to New York City, gaining experience and sharpening his skills at The Essex House, Zoe, Union Square Café, and The Mark—serving under top chefs who prided themselves on training the next generation.

Heading south, Dave became executive chef at Azalea in Atlanta before moving to St. Simons Island, Georgia, as chef at J Mac’s. In 2000, he opened Halyards on St. Simons, opened Tramici in 2006, and most recently introduced the island to Latin street fare at La Plancha to celebrate his Colombian heritage. Today, along with Halyards Catering and Hook & Knife Charters, Dave’s three restaurants comprise Halyard Restaurant Group.

These restaurants, perennially ranked the island’s and region’s most popular, enable Dave to share his love of hospitality, food, and how the two intertwine to create memorable culinary experiences. His monthly cooking classes further communicate his passion—how great food enhances life.

Drawing on his relationships with local fishermen and farmers, Dave demonstrates to eager guests that the best ingredients make a tremendous difference in food quality, in the sustainability of the environment, and in the financial strength of the local economy. He serves on the Advisory Panel for Snapper/Grouper Species for the South Atlantic Fishery Management Council and has worked with the South Atlantic Fishermen’s Association to improve the sustainability and health of the South Atlantic, the availability of local fish, and the financial future and heritage of the fishing industry.

The Georgia Restaurant Association named Dave a finalist for Restaurateur of the Year in 2012 and selected him as one of four chefs to represent the GRA’s Georgia Grown program in 2013. In 2014, Dave was selected to serve on the Board of Directors for the Georgia Restaurant Association. Halyards and Tramici were named 2014 Businesses of the Year by the Brunswick and Golden Isles Chamber of Commerce.

Dave has self-published a cookbook and retails a house-made marinara sauce from the recipe he created for Tramici. His other projects include plans to grow olives and produce extra virgin olive oil for use at Halyard restaurants. Dave also loves to venture to Islamorada in the Florida Keys—his home away from home.

Deeply devoted to community service, Dave serves on the Board of Directors for the Chamber of Commerce, Coastal Symphony of Georgia, The Boys and Girls Club of Southeast Georgia, and Hospice of the Golden Isles. Dave is a founding board member of the St. Simons Food & Spirits Festival, benefiting Hospice of the Golden Isles. He also serves on the Culinary Board for the College of Coastal Georgia and is an active supporter of local numerous area organizations including The St. Simons Land Trust, Cystic Fibrosis Foundation, and The Humane Society of South Coastal Georgia. He is additionally involved in events and fundraisers at local schools where he hopes to inspire the next generation of chefs and restaurant leaders.

One of Dave’s newest ventures, Hook & Knife Charters, combines his skills and passion for fishing with his love of preparing and serving catches to delighted charter guests at his restaurants. To learn more about these unique experiences, visit HookandKnifeCharters.com.

La Plancha is a lifetime of delicious memories of Mexican and Colombian street fare, plus Dave Snyder’s mom’s homemade recipes—all brought to the table by the talented Chef Adam. Adam started his culinary career at age fifteen—learning the ropes at one of Jekyll Island’s favorite restaurants, Latitude. As a young adult, he moved to St. Simons to run the kitchen at Chelsea’s. An ad from Chef Dave in the local paper launched his next career move, and for the last thirteen years Adam has been a key part of the Halyards Restaurant Group family. “I’ve made a career with Chef Dave,” he says, “because around here, we take care of each other. Dave creates a great work environment that I’m proud to be a part of.” 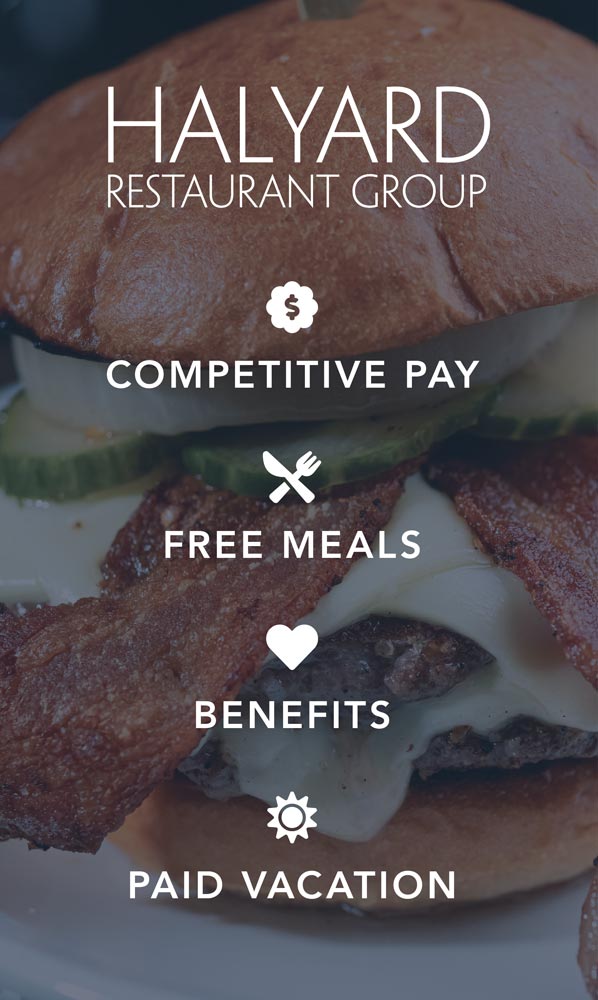 BRING YOUR TALENT
TO OUR TABLE

All three of our unique St. Simons Island restaurants—Halyards, Tramici, and La Plancha—are NOW HIRING! Our kitchens are a fun place to work as part of an amazing team—some of our crew have been with us for over ten years.